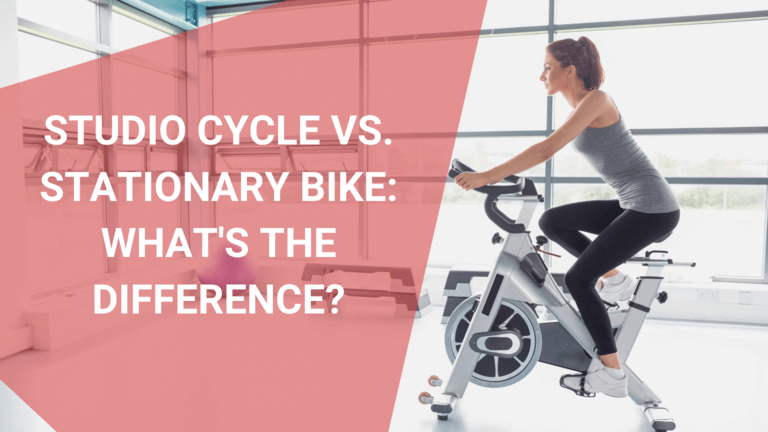 The world of bikes is constantly evolving and changing thanks to advancements people are making in the fitness field.

Every year I get excited because new bikes come out with a ton of new features that I get to try out and sample.

These features can either make my workout that much better, or they can make it easier for me to gather the motivation to get my butt onto the bike.

That being said however, you do have to look at the bikes out there and decide what is best for you. In this article, I’m going to be talking about the difference between a studio cycle bike and a stationary bike.

While they might share plenty of things in common there are also a few major differences. What do you say we dive right in and explore the world of bikes once again.

When talking about a studio cycle and a stationary bike, the main difference people address is the features that are going to be on the bike.

Typically when people talk about a stationary bike, they are talking about the standard bike that you are going to find in your home that isn’t going to take up much room.

Don’t get me wrong, they still deliver a kick-ass workout, but they lack a bit of the luxury that comes with in a studio cycle.

Well you might have guessed already from what I just mentioned, but a studio cycle is going to come with the whole nine yards. This is not just a bike, this thing is like a cockpit and you are going to have full control of a ton of different features.

When we talk about studio cycles, we are generally talking about the bikes that you are going to be finding at your gym when you workout.

These are high quality pieces of equipment that are optimized to get your muscles going. I do want to mention some of these features so you can get an idea of what to expect from both of these bikes. 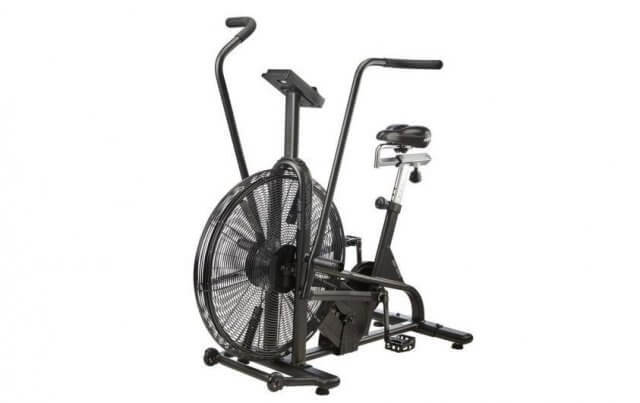 Take the Rogue Echo Airbike for example which is according to the definitions I laid out, a higher end stationary bike.

It does away with the standard chain system and instead opts for a belt drive.

This helps to keep the bike working for much longer without needing much maintenance at all.

This is a step up from their older product the Rogue Assault, as that goes on the standard chain system. These types of systems are subject to failure and maintenance.

When it comes to bikes however, it isn’t just about the chain or the belts either. The next thing you want to look at with durability is the size of the bike itself.

Now, if you’re working out at home, I totally understand if you don’t have the room to buy yourself a large bike. It can be tough to dedicate a section of your room to working out.

Typically, stationary bikes are much smaller than your studio cycles. What does this mean for you guys?

I don’t know if it will affect you too much, but with some of those smaller cycles, I could find myself rocking them back and forth during intense workouts.

Studio cycles give you that extra bit of stability and size so you can really push yourself to the limit. That doesn’t mean a stationary bike can’t be large or stable, it’s just less common to see.

A bike like the Schwinn AC Performance which is a fantastic stationary bike by the way, is incredibly stable and definitely one of the best bikes out there for someone who is looking for an intense workout without much fluff added on.

Overall, larger bikes are going to provide you with a bit more stability and that’s where studio cycles shine. Stability can lead to durability as you aren’t rocking the bike back and forth during your intense workouts. 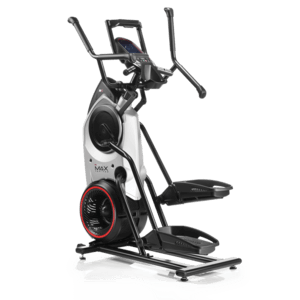 I touched on this above but I just want to mention it again. With your standard studio cycle, you are going to be taking up a lot more room in your home than with a stationary bike.

You are looking at a wide and heavy bike for your house that can sometimes even be elevated quite high.

Bikes like the Stryde Bike are definitely going to be taking up much more in comparison to something such as the Bowflex C6.

The Bowflex C6 is meant to be compact like all Bowflex products are and it is meant to deliver that workout that you are looking for.

Something like the Stryde has a ton of different gadgets on it and even a screen, while the Bowflex C6 not only keeps everything small, but it also adds a holder for your dumbbells.

Studio cycles are built to provide you with as many options as possible for your workouts and thus are naturally going to be slightly larger than their stationary counterparts. 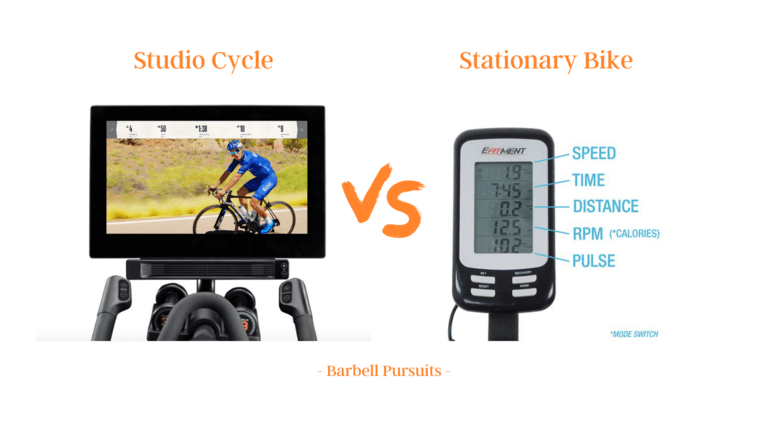 This is the bread and butter of a studio cycle right here and it is what differentiates it from the standard stationary bike.

A studio cycle is going to have a TV attached onto it that you have a ton of different options with.

Are you torn between watching your sports game or getting a good workout in? Why not fire up the TV and watch it while cycling.

Bikes like the Peloton Bike+ go the extra mile and even offer workouts that you can load onto the screen. They do cost a small subscription fee, but does it ever take cycling to a new level.

With a studio cycle like this, it’s no longer just pedalling for 30 minutes. Be prepared for a full-on interactive workout here.

Peloton aren’t the only ones to do something like this either. The NordicTrack Commercial S22i Studio Cycle is another great bike that has a pretty big TV mounted onto it.

Whether you are looking for a casual workout while you watch your favorite sitcom, or an intense guided workout, you can get it with these studio cycles.

I personally love them because if for some reason I’m ever struggling to gain motivation, I simply fire up my favorite TV show and crank out a quick cardio session.

Stationary bikes might not have that giant mounted TV, but that doesn’t mean they are useless when it comes to providing information.

Most of the time they will come with a small little monitor to display some relevant information. You aren’t going to be getting much out of it, but you definitely won’t be biking in the dark either. 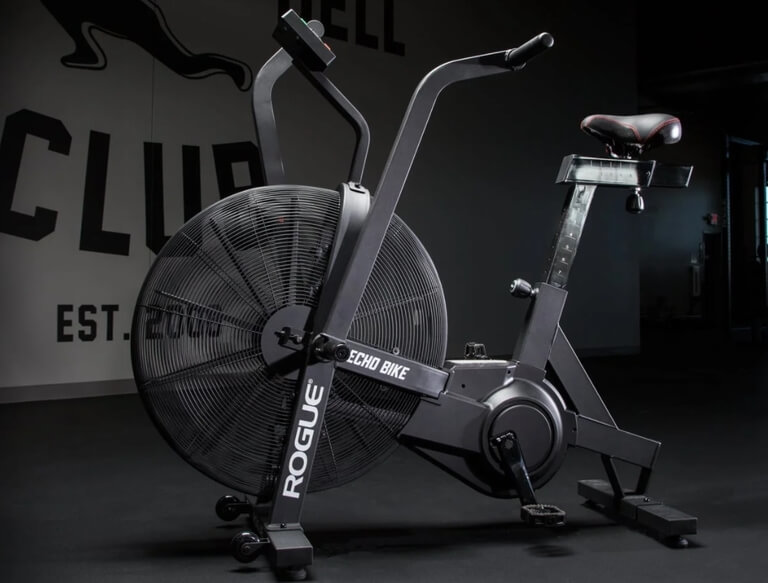 The last thing that I want to mention between these two bikes is the resistance. From my experience, whether you are going with a stationary bike or a studio cycle, they are going to be relatively the same.

The only time I can say there will be a noticeable difference is if you are going with one of those cheaper stationary bikes.

All of these bikes have a great interface where you can control the resistance to get exactly what you are looking for.

One studio cycle that shone in this department however was the Pro-Form Studio Bike Pro 22.

This thing not only came with a TV, but it also changed the resistance during your workouts automatically if you were following someone. This makes it an incredibly easy bike to use regardless of the resistance controls.

Aside from that, I would say that fairly all bikes functioned the same way when it came to resistance.

Overall when it comes to a studio cycle vs. a stationary bike, the main difference you are looking at here is the size of the bike itself and the TV screen.

To me, studio bikes are not only a place to workout, but also a place where I can go for entertainment. On those days where I don’t sleep well or am feeling sore, that TV has been a godsend.

Stationary bikes do away with a lot of the bells and whistles and instead focus on either budget, or pure performance.

In some cases, these stationary bikes are going to outperform the studio cycles, as you can really push them to another level.

As for what you should consider buying, it is totally up to you. Are you looking for a bike that can be used in a compact space, or do you want something that is large and in charge? Is the mounted TV a mandatory thing for you as well?

Make a list of what you are looking for in a bike and then see what fits your style. No matter what you pick, the important part is that you are getting yourself the exercise that you need.

Top 10 Exercise Bikes To Improve Your Health in 2020

Nordictrack vs Peloton: Battle of the Bikes