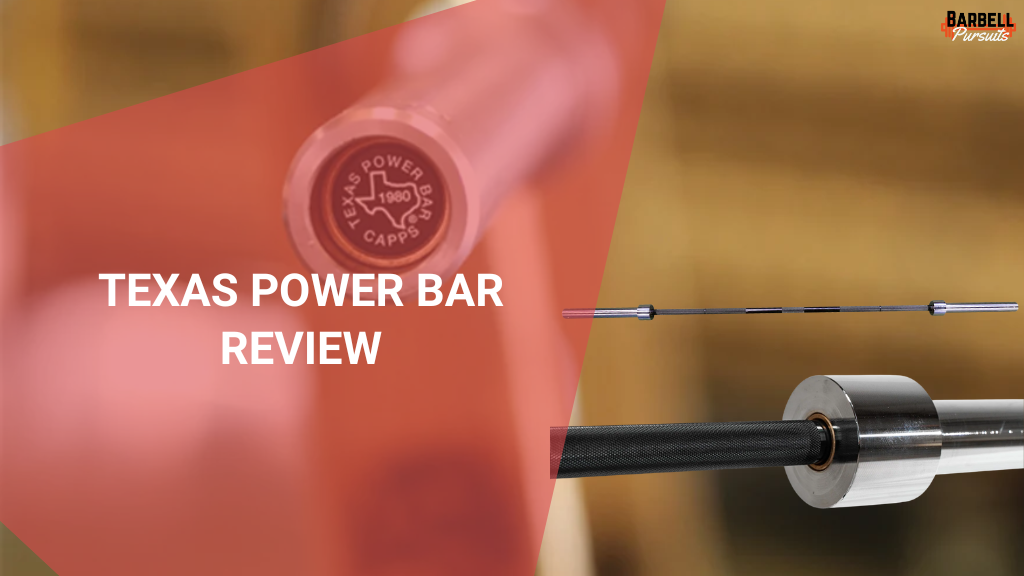 The 1980's are long passed now, even if Stranger Things is trying to bring it back (I'm all for the new found love for Metallica), but one part of that decade is still with us and going strong.

The Texas Power Bar by Buddy Capps is the granddaddy of powerlifting barbells.

If you've been into lifting, especially competition lifting, there's no doubt you've heard of this bar or even used it.

Today, I'm going to be giving you my Texas Power Bar review to show you why it's still a well-respected bar, even with newer power bars being released since.

Since 1980, Buddy Capps has been blessing the powerlifting community with a powerlifting bar that was far and away an improvement over the bars he was using in the 60's.

His goal was to build a barbell with better knurling to provide grip compared to the nearly slick barbells of his time.

This also meant improving the sleeves, instead of a cap and screw they needed to be secure.

A vast improvement in every conceivable way to the competition barbells that came before it, the proof is in the pudding as it's responsible for various lifting records from the 80s to the 2010's.

The original powerlifting bar, the Texas Power Bar by Buddy Capps has been used in more competitions than you or I can count. 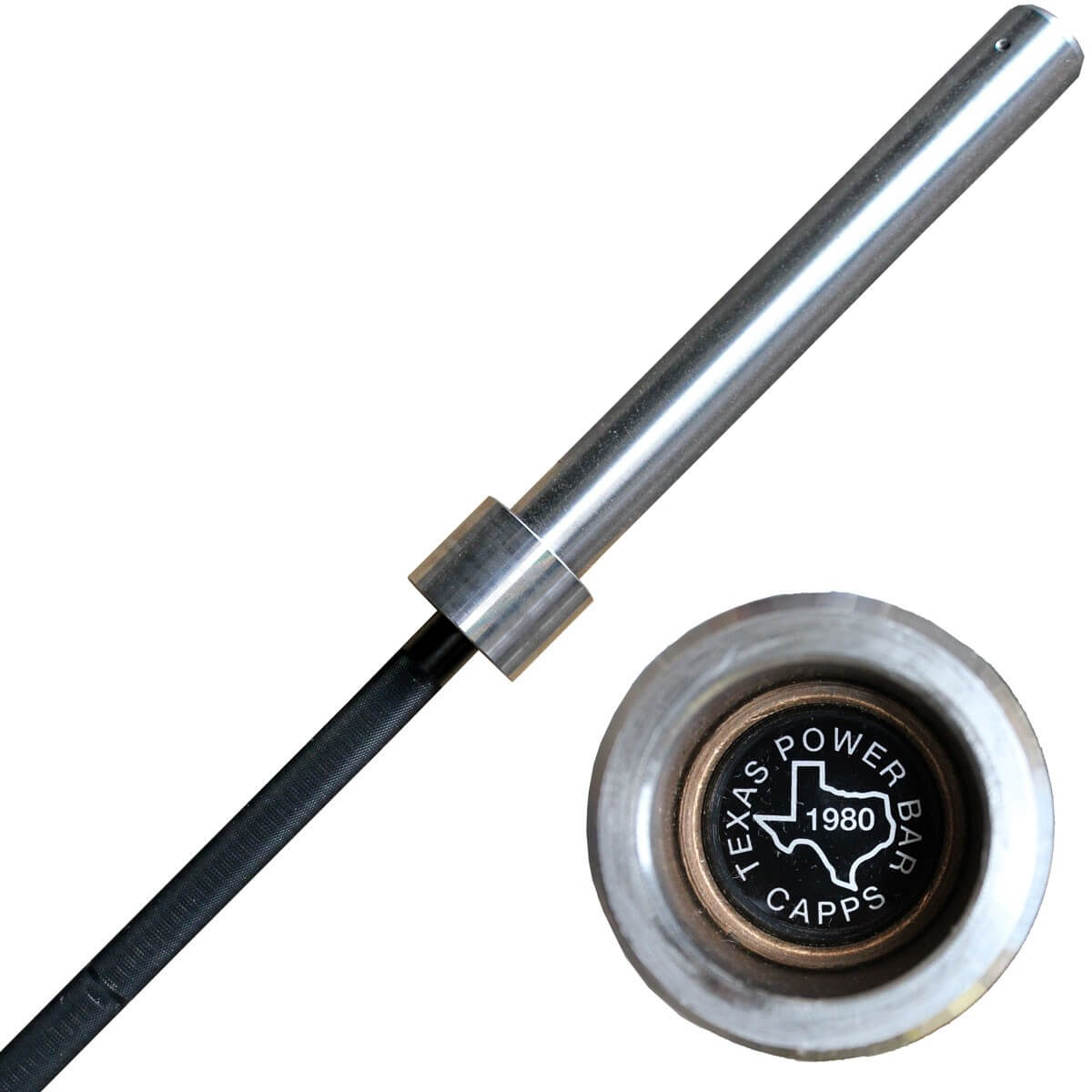 Buddy Capps not only succeeded in his goal of creating a usable powerlifting bar that was dedicated to serious lifters, he created a legacy.

I can wax poetic about the Buddy Capps Texas Power Bar all day, but it's time to look at what makes it such a good power bar.

Texas Power Bar - Is It Worth It?

History and tradition aside, you can't get blinded by the accolades and resume of the Texas bar to know if it's worth it.

First, you need to hold one in your hands and see how it feels and second, you need to actually lift with it.

Assuming you can't do that, hence why you're reading this review, I'll be giving you my opinions on the barbell and the cold-hard facts, like the specs to show if it's a worthwhile powerlifting barbell.

GET THE TEXAS POWER BAR NOW

Even down to the Texas High School Championships level this bar has put in the miles and it's still a trusted power bar.

All that being said, it's not perfect and some of the more contemporary powerlifting barbells, like the Rogue Ohio Power Bar, have supplanted it.

Does that mean the Texas Power Bar should be disregarded? Far from it, it offers a lot of value, and not just because of the low price.

Buddy Capps was tired of the  slick feeling that many barbells had when he began lifting seriously in the 1960's, which is why he decided to make this barbell in the first place.

The knurling is one of the more recognizable aspects of the Texas Power Bar. It's classified as an aggressive knurling and it's true to its word.

Some might consider the knurling too sharp, but I found it really grippy and I never lost my hand placement when lifting.

Of course, I'm used to an aggressive knurling so it doesn't impact me much, but if you prefer something a little more forgiving, the knurling might turn you off.

The Texas Power Bar has a 28.5mm shaft, which is 0.5mm thinner than most IPF powerlifting bars.

This isn't an issue as anything 27mm to 29mm is good, and the 0.5mm won't make much of a difference.

The Texas Power Bar does have center knurling and powerlifting knurling marks so it's a traditional power bar.

I'm a little disappointed in this aspect of the Texas Power Bar - the finish.

It's become quite apparent to most manufacturers that a stainless steel bar is preferred because it's most resistant to oxidation (rust, corrosion).

Even though a stainless steel bar can be more expensive, it's the most durable. Likewise, a cerakote finish is also appreciated for the same reason, even if it is slightly more expensive.

Texas Power Bar has chrome, black zinc, bare steel, and cerakote options (8 color options), with bare steel being on the lowest end of the resiliency spectrum for rust-prevention and lowest price.

The cerakote finish Texas Power Bar is the most expensive, at $345, with the other options averaging around $300.

It helps keep the cost very low for most of the Texas Power Bar finish options, but if you lift in a garage gym or outside, or anywhere that there's a lot of humidity or exposure to moisture, your bar won't last as long.

Fortunately, chrome/black zinc/cerakote are all much more rust-proof, but it's still susceptible to scuffs and scratches, but it's a powerlifting bar, not an antique - it's going to take some abuse.

Similarly, expect to pay a little more, but the durability is worth it.

It's good to see a bar that's steeped in tradition update it's options to compete with the modern class of powerlifting barbells. 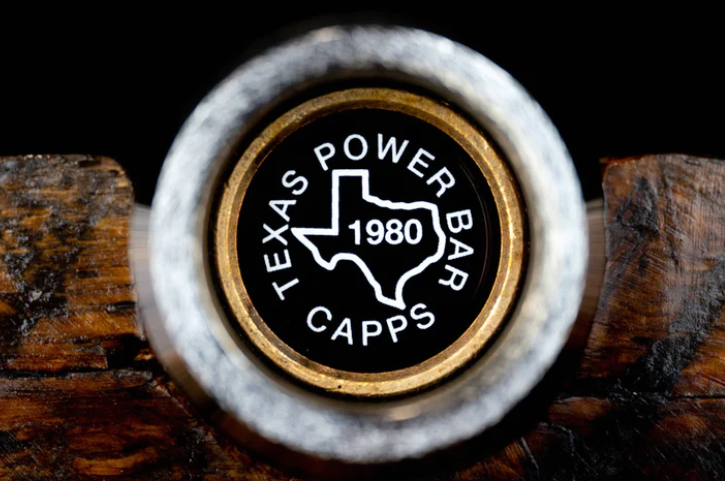 The Texas Power Bar isn't among the strongest when it comes to tensile strength.

A 190 000 PSI rating is fine, you're never going to push that limit, hence why it's still used in serious competitions (2017 - Joseph Pena 1025lb Squat at Texas High School championships).

Some contemporary competitors like the REP Power Bar EX have a 200K PSI rating, which is fairly common, and some go up to 210K or higher.

It really isn't a big deal and people focus too much on the specs are missing the bigger picture that the bar is going to handle its own.

I guess not everything is bigger in Texas.

A car with 300hp vs. a car with 700hp is only as good as the person behind the wheel, same applies to the power bar.

Keeping that in mind, the bar also has little to no whip, so it's very much a traditional powerlifting bar.

Whip means how much flex or bend the bar will naturally give.

A good powerlifting bar generally is very stiff, which is good for squats and bench press, but not as good for deadlifting.

Deadlifting bars have more whip or flex which lets the plates dip lower to the ground.

Ever since Rogue debuted in 2007, there's been a constant argument of the Rogue Ohio Power Bar vs. Texas Power Bar.

Both states of Texas and Ohio are respectively considered the meccas of powerlifting, going down to the high school championship levels and due to a strong history of football.

The spiritual successor to the Texas bar, the Rogue Ohio Power Bar is known by many as the new king of the mountain for it's improved technical specs. 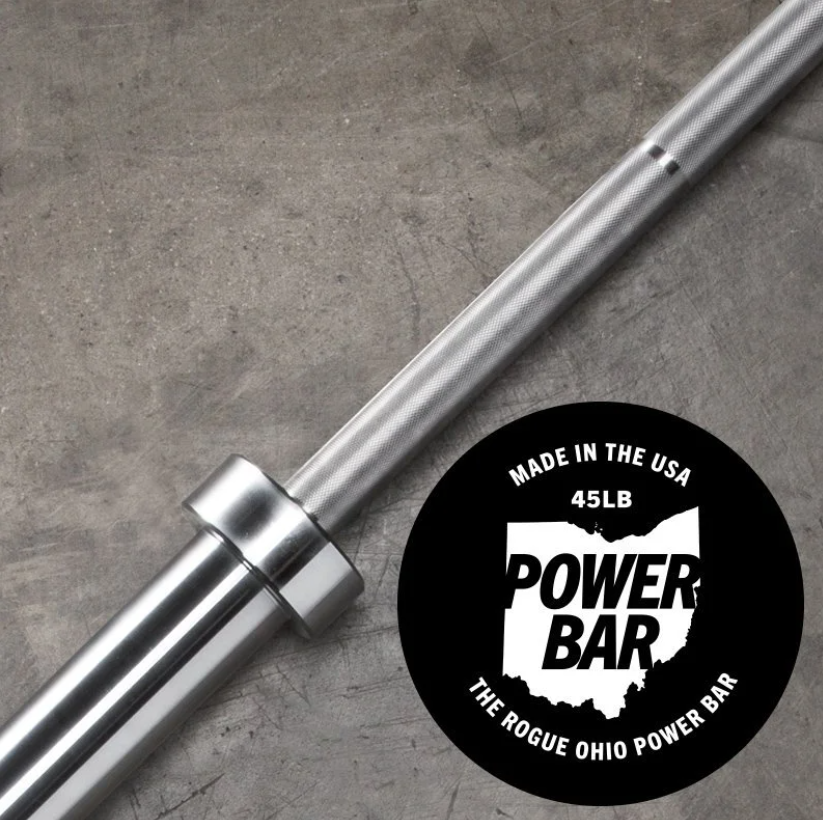 The Rogue Ohio Power Bar is, for all intents purposes, the modern successor to the Texas Power Bar.

It has a 200-205K tensile strength rating, features more finish options (including stainless steel and cerakote), longer loadable sleeve (16.8"), better knurling (this is purely preference), and is IPF-approved.

There are some objective reasons the Ohio Power Bar can be considered better from a technical standpoint, but a lot of it is personal preference, such as knurling.

The state of Texas is big, but is it big enough for two power bars? The Fringe Lone Star Power Bar sure seems to think so.

With specs like this, Fringe's 20kg power bar definitely appears to be a Lone Star state adversary to the Texas Power Bar.

A no-nonsense power bar, the Fringe Sport 20kg Lone Star Power Bar is worthy to carry the flag of Texas as the Texas Power Bar. 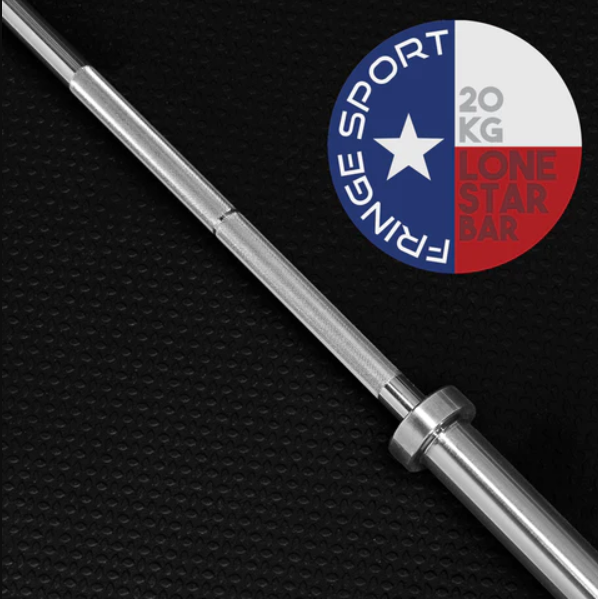 What kind of specs? For starters, the bar has a max weight capacity of 2000lbs, insane, but unlikely you'll ever test that limit.

The Lone Star Power Bar also has a similar 190K PSI tensile strength rating, but it features even more aggressive, "alligator" knurling which Fringe claims will, "...devour your hands."

Jury's out on whether that's a good thing, but at least it provides ample grip during powerlifting.

It has slightly longer loadable sleeves (16.5") and is made of polished steel. Otherwise, it's a very similar barbell but it retails for $100 more.

I'll get it out of the way, the Titan Power Bar is very much a no-frills powerlifting bar.

Does that make it bad?

No, but it doesn't have the prestige or Made in US level of manufactured quality, but what it lacks in history or prestige, it easily makes up for with surprisingly good technical specifications.

What it lacks in history, it makes up for in performance. The Titan Fitness Power Bar is a no-nonsense powerlifting barbell with a generous weight capacity and durable finish. 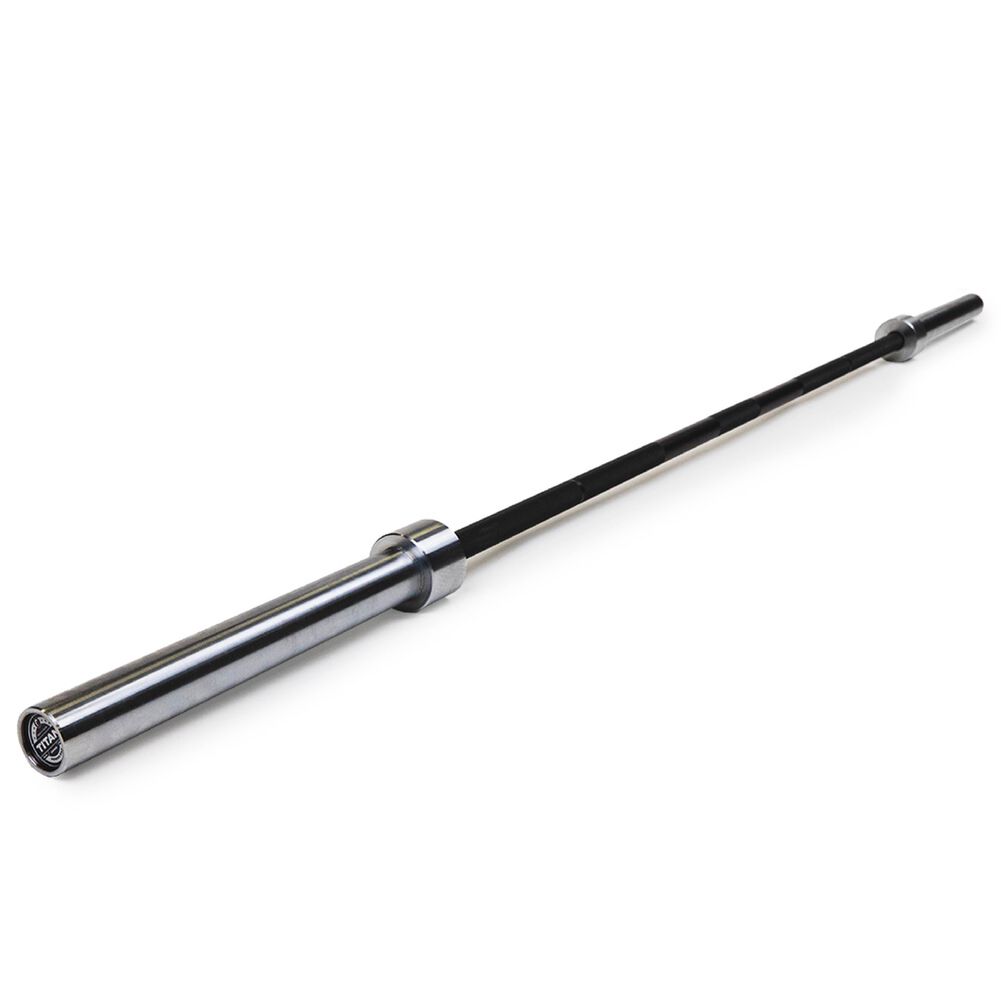 Titan doesn't have the power bar prestige as some other names on here, but that doesn't mean their entry in the powerlifting barbell class isn't a worthy competitor to the Texas Power Bar.

Texas Power Bars has grown significantly since its humble beginnings in 1980, the brainchild and effort of Buddy Capps, but it still very much follows its "for the people" roots.

Part of their commitment to providing the utmost quality in their products is the fact they're still proudly manufactured in the US, Texas to be exact.

Offering a lifetime warranty on all of their barbells is a guarantee of satisfaction, and if you do have any questions or concerns, you can contact them by email, phone or contact form on their site.

The Texas Power Bar isn't just beloved by competitive lifters, the average rating of 5-stars (out of 5) by the overwhelming majority of customers on their site just goes to show the reputation their products have.

It's not just about the barbells either, they maintain their community-minded approach which makes them a trustworthy brand.

Head over to the Texas Power Bars website to see for yourself why people love this barbell.

The godfather of power bars hasn't fallen off since, and unlikely too in the future, if they continue to offer the Made in USA quality guarantee.

The pedigree and performance of the Texas Power Bar is hard to beat.

It's no surprise that it has been a staple of weight lifting competitions for years before, and years to come.

Is the Texas Power Bar Worth It?

For each retail price, depending on bar finish, the Texas Power Bar is among the most affordable power bar given it's history and quality.

The Rogue Ohio Power Bar is one of the best power bars ever made, and while it is more expensive than the Texas Power Bar, the value is apparent.

How Much Does The Texas Power Bar Weigh?

What is the Texas Power Bar Used For?

The Texas Power Bar is used primarily for powerlifting (deadlifts, squats, bench press) but can be used for nearly any barbell lift.